During the year 2000, there was a revolution broke out in the fashion industry. Lose casual fitting jumpsuits which are made up of cotton which is knitted which is used in Sweatshirts are been ornamented with fleece or chenille. These dress looks like sleepwear or loungewear. These dresses are been introduced as Onesie. During initial day these apparels were used as infant bodysuit, however these days, the dress had gained familiarity amongst the adults both for men and women. 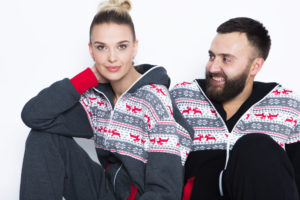 The dress had been reintroduced as a stylish street wear in UK and Australia. People across these countries introduced these apparels as Street Fashion during the late 2000s and early 2010s.

During the earlier times, the entrepreneur and musician, Steve Pandi had conceptualized and introduced the product into the market. Steve was said to be the first to introduce the adult Onesie and was the only vendor to supply the products of JumpinJammerz, his company. The growth was very rapid and started to promote the apparel through a television show “Pajama Party” produced by the Oxygen TV during the year 2000.

It seems, the Onesie had turned to be favorite for many superstars across the world. Sometimes it was the best and favorite gift presented by the stars in various occasions. JumpinJammerz was introduced worldwide through the presence in Academy Oscars Awards in the year of 2007.

The Onesie turned popular amongst men and women

The men Onesie and women Onesie was introduced and accepted by people. The apparel is very soft and comfortable to work all the time.

Macklemore, the recording artist had used the Adult Onesie in one of his famous Lyrics called “Thrift Shop”. The Music album become famous and more than 7 million albums were sold across the United States. The Style and the music won the hearts of the people across various countries like Netherlands, Australia, New Zealand, Denmark, Canada and other countries. This video had said to be the Number one in United Kingdom.

The fame of the music album had also enlightened this style because the Onesie was used as a apparel by Macklemore.

The derivation of Onesie

Onesies, this term is derived from an infant Bodysuits brand name for which was founded by the “Gerber Corporation”. This term is generally used by the people of United States.

The Onesies for Infant is generally without sleeves and without legs. The crotch is stitched with snaps or Buttons.